Mergel is the Danish word for “marl” - a chalky, wet and lumpy clay historically used to fertilize farmlands. In the past marl was mined all over Denmark by digging pits, both large and small, deep into the ground. Once depleted, the pits were often abandoned. Over time many of these pits filled with rainwater and transformed into beautiful, but sometimes dangerous, pseudo-lakes that are now home to a wide variety of wildlife. However this wildlife is rapidly disappearing, as marl pits are increasingly viewed as obstacles in the agricultural landscape and actively destroyed.

The exhibition Mergel features a text by Danish artist Lise Haurum, written from the perspective of a marl pit - observing the growth and decay of surrounding wildlife over time. The exhibition also features clay samples excavated by Haurum from a former marl pit near her home on the east coast of Jutland.

The exhibition Mergel features a text by Danish artist Lise Haurum, written from the perspective of a marl pit - observing the growth and decay of surrounding wildlife over time (included below). The exhibition also features clay samples excavated by Haurum from a former marl pit near her home on the east coast of Jutland. 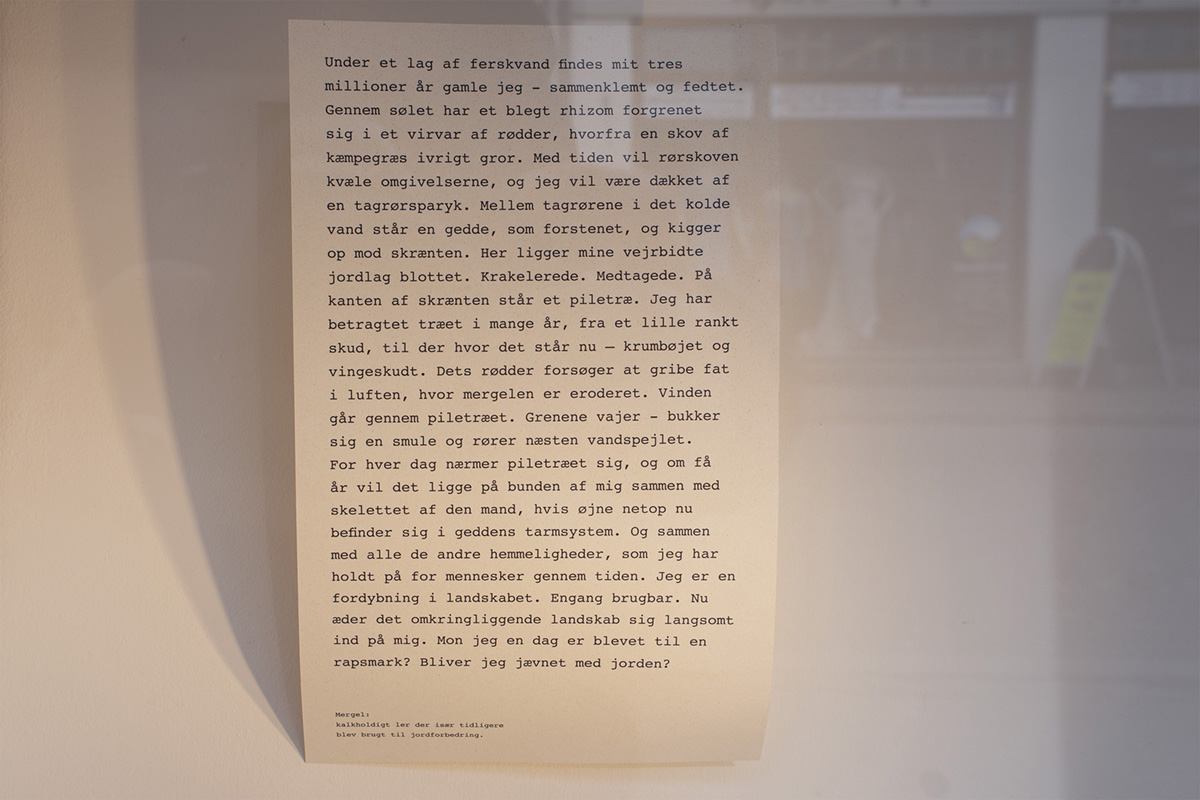 Under a sheet of freshwater lies my sixty million year old I – compressed and oleaginous. A pale rhizome has branched out into a tangle of roots through the ooze, from which a forest of giant grasses eagerly grows. In time, the reed bed will choke its surroundings and I will be covered by a wig of marshland plants. Between the reed stalks in the cold water a pike, as if petrified, stares up at the sloping bank. There, my weather-beaten soil lies exposed. Cracked. Worn down. At the edge of the bank stands a willow tree. I’ve observed the tree for many years, from the time it was a small upright shoot to where it stands now; bowed and wounded. Its roots attempt to grasp the air where the marl has eroded. The wind moves through the willow. The branches sway; bending slightly, almost touching the surface of the water. As each day passes the willow comes closer and in a few years it will become a part of me, together with the skeleton of that man whose eyes are now in the pike’s intestinal system. And join all the other secrets that I have held for people through time. I am an indentation in the landscape. Useful, once. Now, the surrounding land slowly eats away at me. Will I one day be a field of rapeseed? Will I be demolished?

Marl:
Calcerous clay often used in the past for soil enrichement. 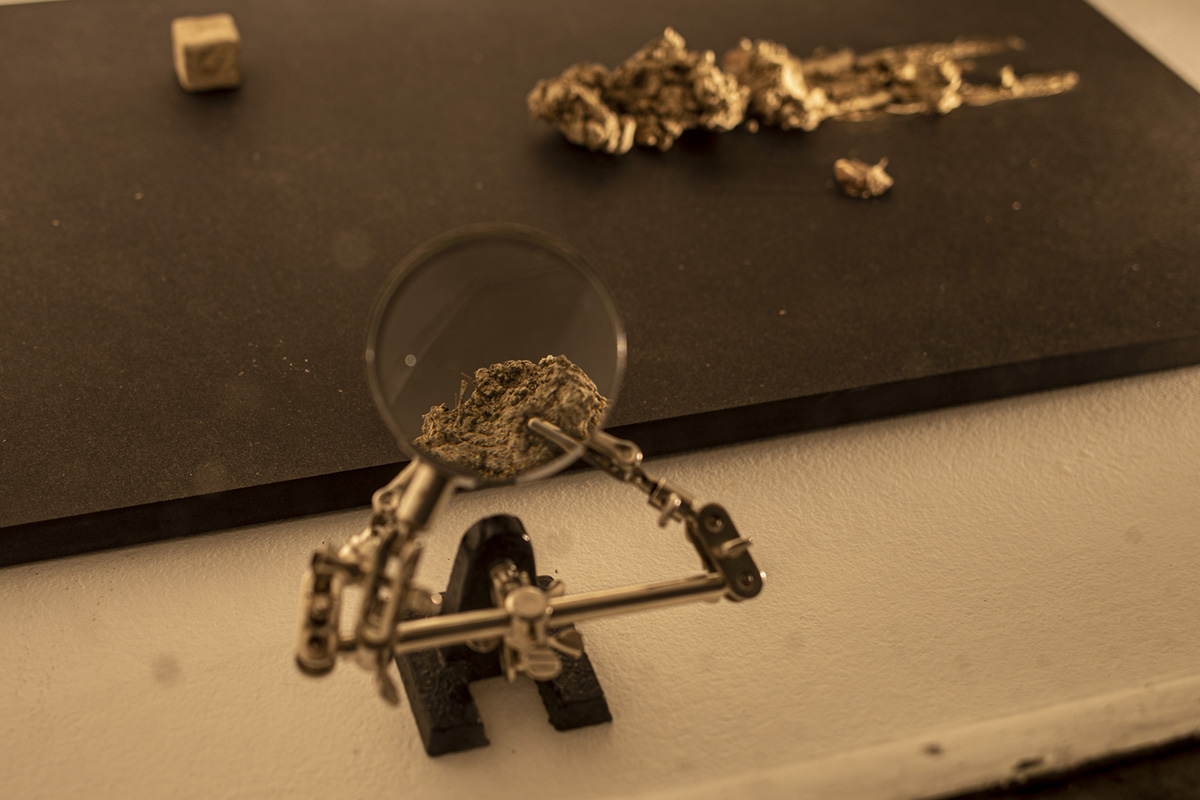 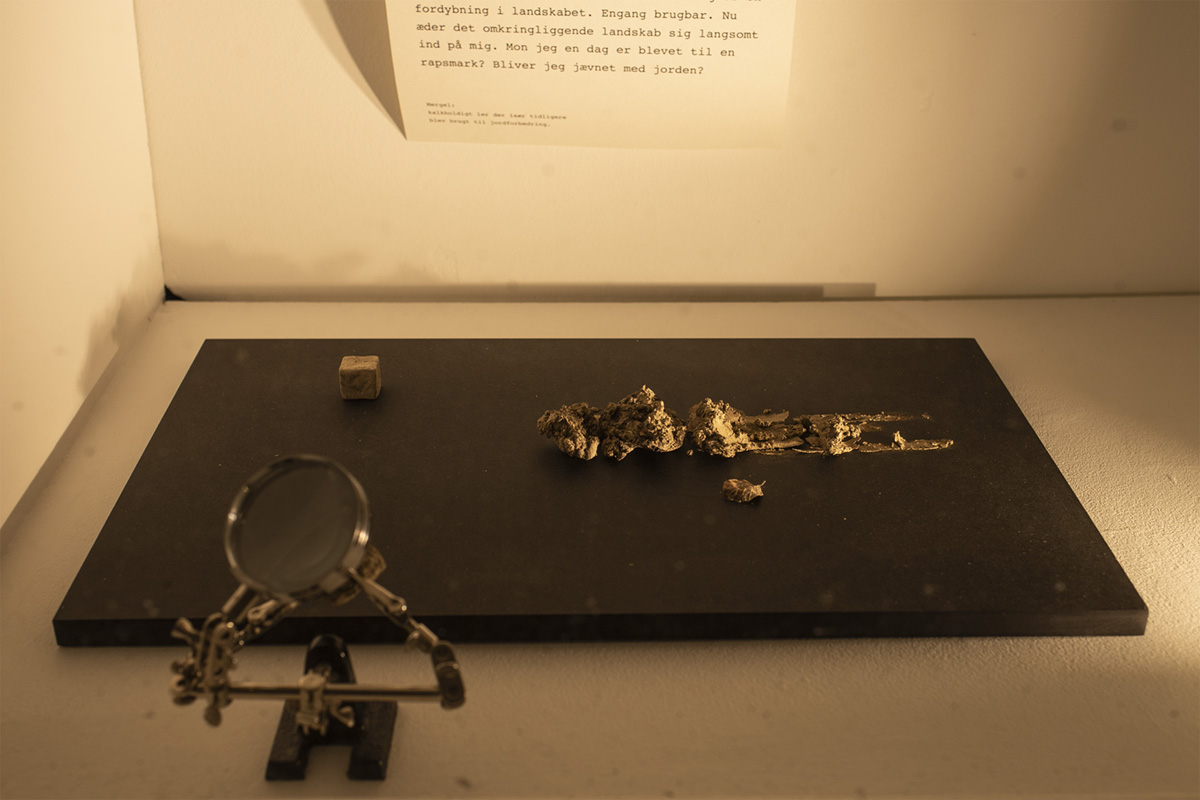 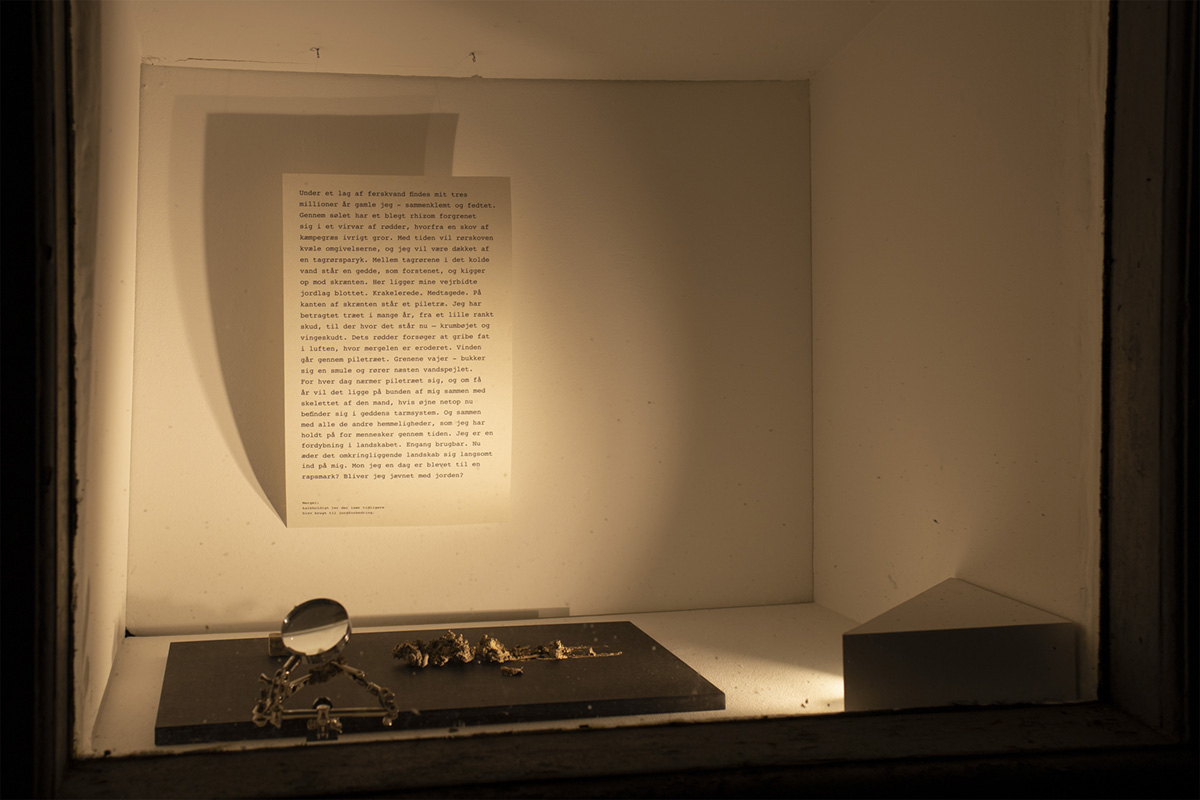 About the artist
Lise Haurum is a visual artist and writer who works with artist books, installations, and performances. She has published several books including the text collection HAND FOR THE SUN (2015) at Forlaget Virkelig and the concrete poetry book Rød (2016) at Forlaget H. She has also produced a number of handmade books in small editions since 2007. Thematically Haurum is interested in nature. She is motivated by an urge to understand the complex relations between man and nature, and to shed light on natural phenomena. Haurum often conducts extensive surveys of natural landscapes as a starting point for her text-based and visual artworks. Haurum studied visual art at Konstfack in Stockholm (2011) and writing at the literary school Litterär Gestaltning in Gothenburg (2010).

Haurum developed Mergel in response to the previous exhibition in The Demo Room, Silo by Chris Woodvine (UK), which explored clay mines in England. Woodvine and Haurum will continue their visual dialogue with a duo exhibition in the window venue at AirSpace Gallery in April 2021.

Call & Response is curated by Pamela Grombacher, in collaboration with AirSpace Gallery and Galleri Image. The project is supported by the Danish Art Foundation, the City of Aarhus (Kulturudviklingspuljen), Arts Council England, and Stoke-on-Trent City Council.